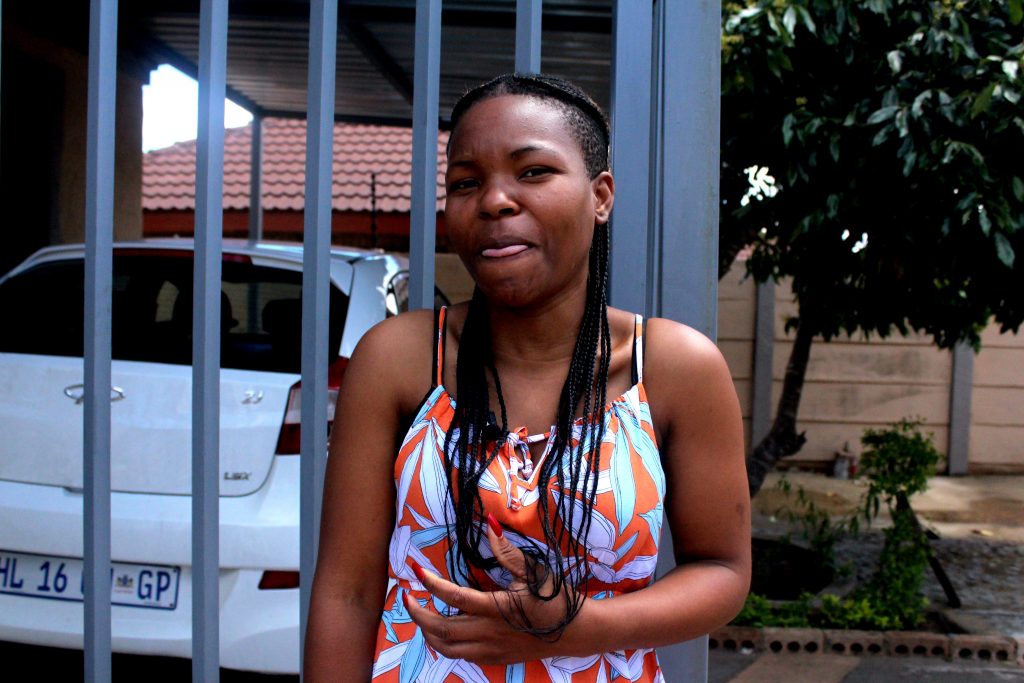 This is where you find out how I juggle my other responsibilities as we shoot this web series. In the morning I had a school presentation on Microsoft Teams. The moment we got to Mosima’s house, I logged-on, wait for my turn to present and executed my presentation while sitting on the curb of the street that Mosima lives on.

Right after my 6-minute presentation, we went into Mosima’s home in order to record her interview. This time Twiggy and Rama were in the room alone for the interview to make it a more intimate conversation. Rama being the Pedi speaking crew member was an important element of the proceeding.

After the interview, I took portraits of Mosima, however she kept trying to pose. So I had to trick her into being a lot more candid, and I ended up capturing her in her natural, but beautiful state.

From Mosima’s house, we went to go and visit her children. We arrived in a more rural area, and were welcomed by her father and sisters. While we were there, Twiggy organized a call between Mosima and he kids. The older boy (who much have been about 8 years old), was quite reserved, and had such a innocent and precious nature. He spoke to his mother timidly, but with love nonetheless.

Then the younger child (who must be about 5 or 6 years old) received the phone to speak to his mother, and I saw Mosima’s personality there. He was confident and outspoken like his mother. He even looked just like her.

He and his mother went on an entire tangent. They spoke as if they were best-friends, and I was shocked about how much tea this baby has in his life.

As we left the house, we were just talking about how intelligent the younger child was, and how much sass he has as well. You know what blew my mind? Rama confirmed that the child was not a boy, but instead was a girl. So what we had witnessed was a mother-daughter relationship and it was a pleasure to watch.

The day had Rama thinking about her own son. As she spoke about him and her family in Limpopo, we came to understand her better. We also found out why Rama treats me like I’m her child. It’s because me and her son have the same birthday, meaning our birth charts are quite similar. I probably have similar character traits.

On the ride back to the guesthouse, we reverted back to our usual silly ways. Twiggy switched on the navigator and began to flirt with Siri. Then she asked me a question that blew my mind.

I knew that she didn’t ask that question because she wanted to know, she asked it to trick me. In that moment I felt as though I had been asked a physics question because in that moment I really didn’t know. I had spent a month around this woman, and I didn’t know whether she was short or tall. I mean, I was under the impression that she was tall. Then when we got out of the car to pick up some food, I realized that a person’s aura can make them seem taller, because she is actually quite short. She seemed to really enjoy the inner turmoil that question caused me during that car ride.

I started imagining myself with a pet snake, and I loved idea. So, I decided to vocalize it.

“Ey guys, imagine Thobe with a pet snake”, I said (because I sometimes refer to myself in he 3rd person, lol).

Then Twiggy said, “A snake with piercings”.

This made me laugh so hard because I think she believes that I enjoy piercings so much that I would be crazy enough to pierce my pet snake.

When we got back to our digs, the first thing that was mentioned was whether or not we would run into the suspicious old man from the past two nights. Then our ‘irrational’ fears came up again.

Our worries were put at ease when Twiggy said that she would just “put him to sleep” if he tried anything. She said it so confidently as if there is a side of her that we don’t know about. Like she was in the Kumite or something.

Rama had a lot on her mind that night, and I could tell it had something to do with visiting Mosima’s children. Rama thinks about the people she loves a lot. And she thinks about love a lot. In fact, so does Twiggy and Uncle Evans. Rama always speaks about the act of falling in love, so much so that she can go on tangents about what love should feel like.

Twiggy shows her love of love through the way she mentions Sindi, her wife. On the first day of our trip, she was already talking about how much she missed her.

Uncle Evans, is constantly in contact with his family as well, and seems to brood when is his apart from them.

Since when did Africans start expressing their love so freely? Why was I so unaware of how normal that is?

And when Africans talk about love, the happiness associated with it is blatant. I don’t want to go into a sermon about black love, but witnessing the way we behave because of love makes me believe in the spirit.

What I’ve noticed about Twiggy is that she enjoys playing match-maker, and when I asked her why, she said: “I just want to see people happy”.

Happiness is dependent on the love you have. Its dependent on the amount of your love that you able to distribute. It is being able to securely give your love and receive another’s love in return. Then you would have to think about what causes love, and stop immediately because you know that you would also have to face the facts; mankind blocks their blessings because of their superficiality.