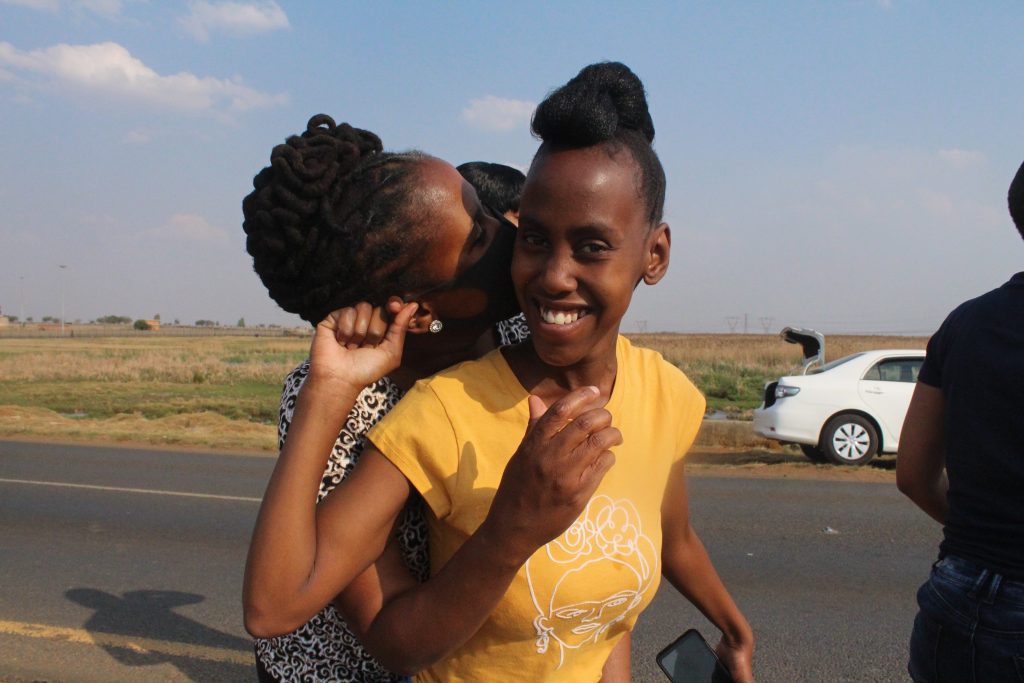 We were completely oblivious as to who we were meeting that day. Little did we know, we would be walking into a women’s secret hideout. The one person that was caught the most off guard, was probably Unkeli. He found out who women can be when men are not around, because the women we ended up meeting were… unfiltered. And I mean this in the most positive way.

The person we interviewed that day is Kgomosto, who we later found out, actually mainly goes by the name Scado.

At home with her was her mother, Ritta, her aunt, Precious, and her mother’s friend, Zama.

I remember Twiggy saying how afraid of Zama she was, because she seems to have what people would call ‘hard core’ in appearance. This is probably because of the tattoo she has on her face and silver caps in her mouth. I have a different theory though; I think she just has a domineering personality which can be scary to some, because it is unusual for women to be that open about they’re dominance.

Scado’s mother, Ritta, is someone who has lost all patience with the pressures of being someone who is inhibited by social construct, as she speaks with the utmost liberty, unhindered by the thoughts of others.

Precious, on the other hand, had a more modest approach to her liberty. She could even be considered the quiet one.

Looking at the cocktail of women that Scado grew up around, her personality makes perfect
sense. She too is quite outspoken and confident. However, you can tell that she does get hurt by the  way society treats her because of her condition.

One of the first things she told me was how when she had approached a photographer and said that she would love to model as well and would love to have her pictures taken by him, he said: “I don’t work with disabled people”. At the time I was carrying a camera and I realized the power that people with cameras have. In second year, I remember being made to read extracts from Susan Sontag’s work, ‘On Photography’. She speaks about how a photographer has the ability to violate a person because they are able to use their power to capture a moment in which they have control over your representation.

In her interview, Scado also shared that she had been denied employment because of her disability as well during lockdown. To make matters worse, she doesn’t even have the social freedoms of level one that the rest of us are partaking in, because her condition puts her at higher risk of contracting Covid-19.

After experiencing the coldness of society, discrimination and even health issues, she  remains undefeated. Her mother says that she often makes fun of the way Scado speaks is order to desensitize her to insults, because she has always had a fear of people in the outside world breaking her daughter’s spirits. This method of emotional conditioning would appear quite harsh to a lot of people, and even unsupportive. However, it is a method you would expect from a person as brazen as Ritta.

After witnessing how full of life these older women were, Twiggy made a playful suggestion to Zenande, which was to date an older woman. Immediately, I thought that she was implying that an older woman would bring Zenande out of her shell, which was hilarious to me at the time.

I remember when talking to Scado alone outside, she mentioned that she still wants to model. And when I heard that it was as if she told me, “I would like to continue loving myself. In fact, I would like to love myself more by looking at my portraits as art.” She also told me something that ‘strong’ black women are afraid to admit these days; that she just wants to find someone that loves her.

With unfiltered feminine energy flying across the room and the song ‘Moya Wami’, playing on repeat all day, one would swear that this is a home with one women in it.

We were wrong, apparently Scado’s father lives there as well.