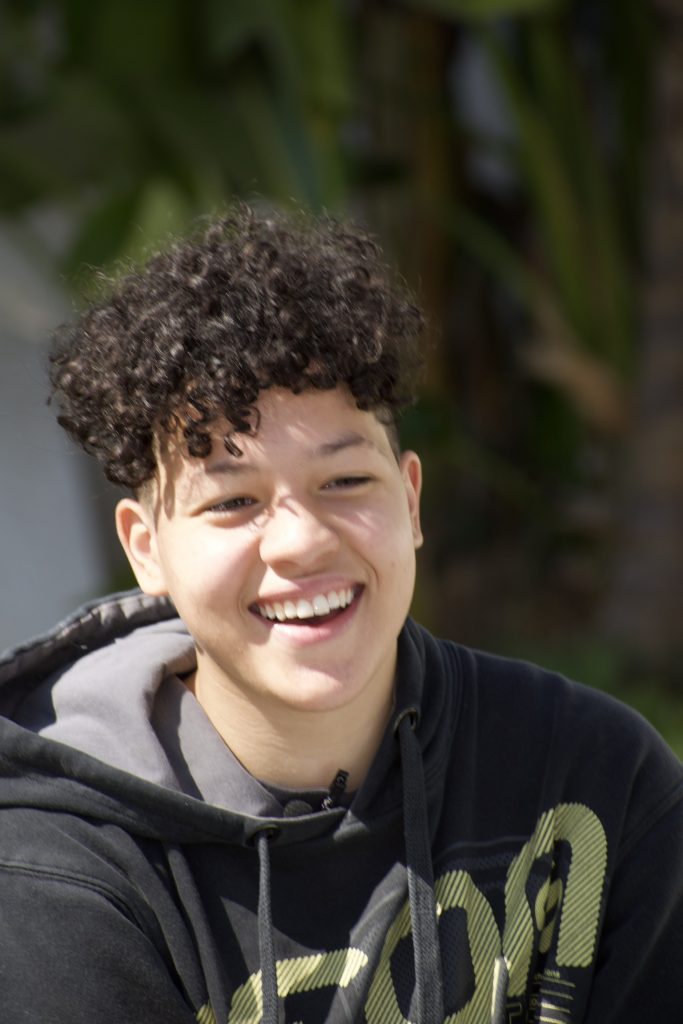 For the first time in years, I had to wake up at 4am. After a car ride, a train, and another car ride, I finally got to the office where I met Linda and Rama. I don’t think either of us knew what to expect honestly.

We knew that morning that we would be interviewing a 19-year-old transgender male named Malakai, who’s ‘female-to-male’ transition has been disrupted my the forces of the Covid-19 pandemic, and the national lockdown.

Linda and I are the first ones to arrive at Malakai’s house in Northcliff (our first subject), and Linda, who already has a long-term friendship with Malakai, kindly led the way.

I met his dogs first, and I think I almost fell in love when they didn’t bite my arm off. In the same breath, I must say that I need to stop forming unhealthy attachments with other people’s pets. It’s sad.

From the moment we entered his home, the young man gave hospitality a new name, by making a premium, grade A cup of tea. Then to top us off, he and Linda poured me some metaphorical tea, and that was the moment I realized that my social life has been drier than a the lips of a crack fiend. However, I’m grateful that I am not the masochist that Linda is, who drinks black tea with no sugar or milk. She’s seems to have it together in other aspects of life, but everyone has a fatal flaw. I don’t use the word ‘fatal’ loosely, because the way she drinks her tea may get her killed one day. I say this with the utmost adoration for as well.

Eventually, the rest of he crew made it to Malakai’s house, and that was when I realized who the weakest link in our crew was. Rama. The weakest link was Rama, because she couldn’t get out of the damn car due to her trembling fear of dogs. Make no mistake, I made fun of her for it the entire weekend.

As Twiggy and Zenande approach the front door with the cameras, Malakai hits us with a disclaimer, “Could you please call me Tameah around my father.” Then, upon entering his home once more, I took notice if the photos that are on the stand near the front door. They were pictures of him as Tameah.

I then realized the overwhelmingly complicated life that he lived, and it was the moment I knew that I was walking into situation that would truly test our capacity to be in control emotionally. This is how I imagine the entire journey through this web series to be; emotionally difficult.

We experienced two completely different environments in that one day, and both those environments are places that Malakai calls home, which is a result of his parents decision to do away with the conventional nuclear family structure, and part ways.

Malakai expressed that during lockdown, he was essentially forced into being homebound with his parents, which caused tensions with relation to his gender as well as his transition.

In my attempts to comprehend another’s existence, I sometimes stumble upon people that seem to straddle the concepts of childhood and adulthood for long periods in their lives. After spending a day in his presence, I had the feeling that Malakai was one of these people, because of the responsibilities he had while maintaining his youth (not only because I was confused at why a 19-year old would be driving an Audi TT as his first car).

He takes his younger cousin, to school and back everyday. He cares very deeply for his two single parents, who seem to often lean on him, maybe without even knowing. He has his matric year to worry about as well, which is arguably the most stressful time in a teenager’s life. Furthermore, his three dogs are exceptionally trained; probably by him too.

Now I came to realize why I kept identifying wisdom through his words; it was maturity.

In terms of great moments during that day, they would include: the moment we shot a scene of Malakai and his cousin talking while sitting in a tree.

There was also a moment when Malakai played the guitar for us, which gave the entire crew to have a minute of mental readjustment with the guidance of the vibrations of six strings. One sting for every person that was in the house at that time.

Another memorable moment, was actually the moment that Malakai’s mother came back homeland joined him for an interview that probably positively changed their relationship in a large way.

During interviews, I would see Twiggy light up when he would speak or do anything for that matter. Then when we met Malakai’s mother, she displayed even more joy. If I’m being direct, this family had her swimming in the deep end of her feelings.

If I’m being truthful to myself as well, I felt as though, after 5 months of isolation and sentimental emptiness, I began to burst at the seams. I felt compassion, which is something I think I have in abundance, but have not expressed in a while.

Do you remember in the first entry, when I summoned the powers of self-actualization and epiphany during this journey? Well, we are off to a strong start.